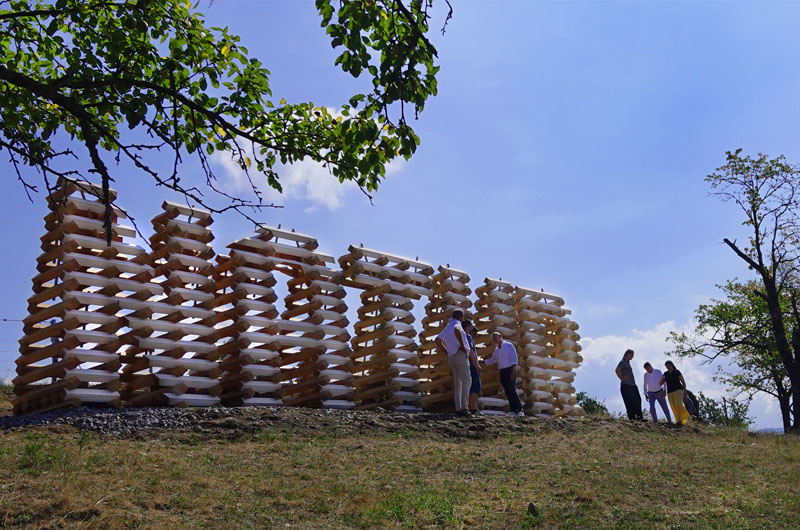 Open Sculpture Day - on 24 July, the first NATUR sculpture was handed over to nature.
1 / 7 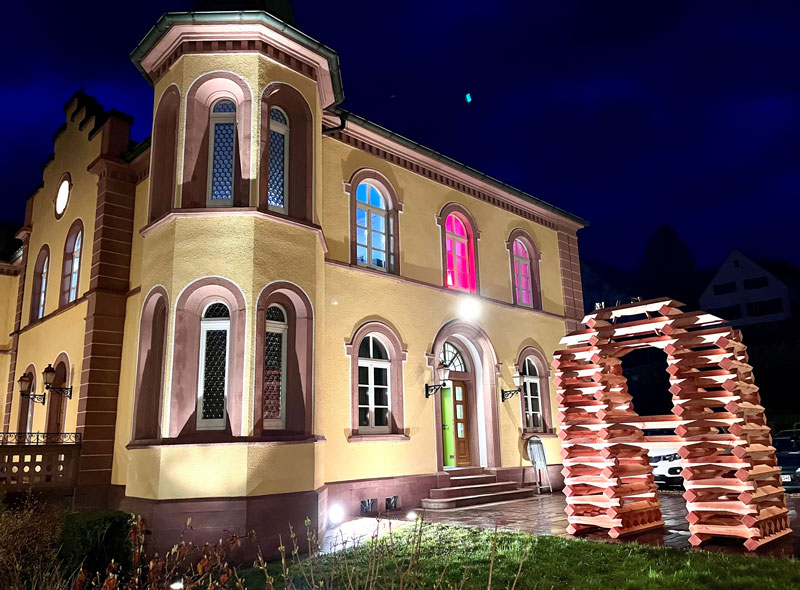 NATUR meets culture, a visitor's night-time impression of the illumination at the Museumsnacht in April 22. Image: M. Baumann.
2 / 7 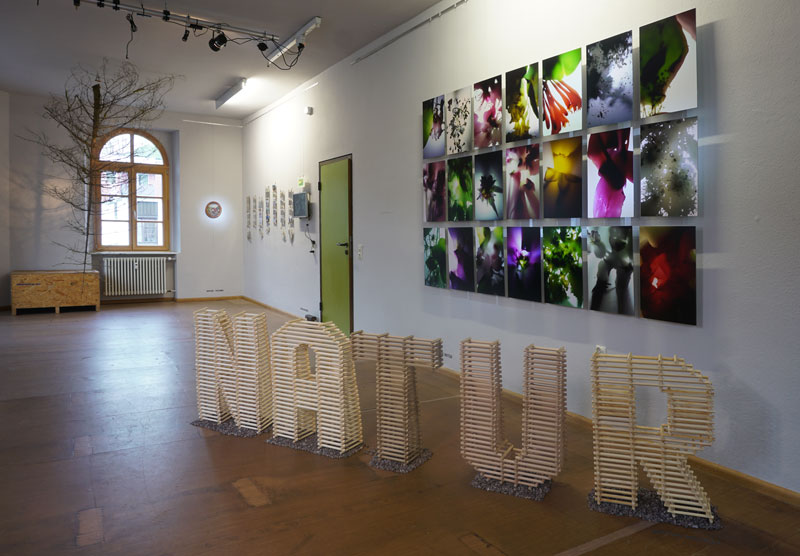 The model for the 14-metre-high edition of NATUR in front of the shadow herbarium "flora domestica".
3 / 7 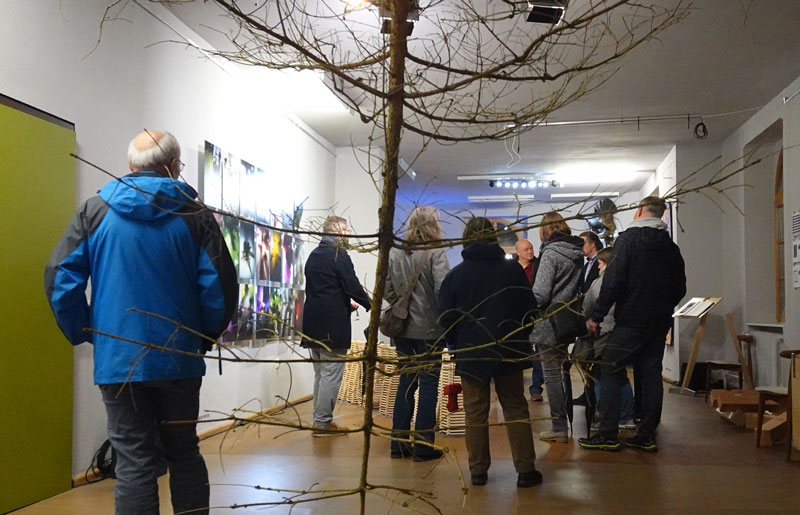 Exhibition as exposition: The Museum Night with hundreds of visitors offered the opportunity for numerous lively conversations.
4 / 7

Landscape and nature in transition. Presentation of historical postcards and video animation with superimpositions of aerial photographs of the Black Forest region.
5 / 7 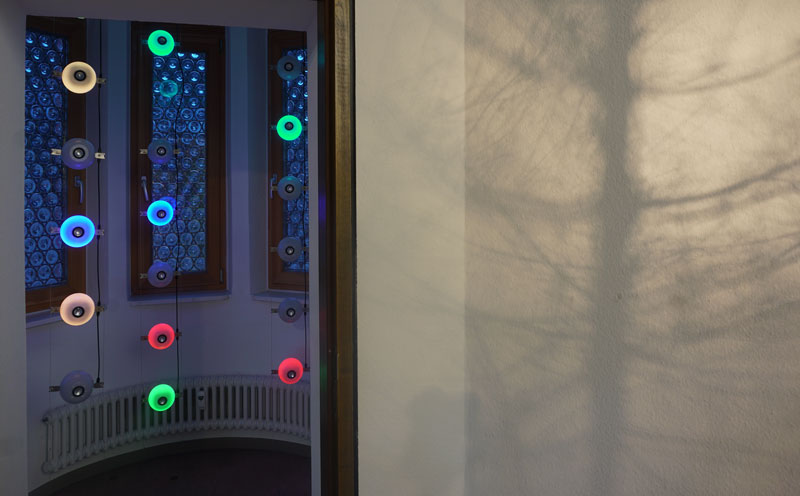 Shadows of a 2020 dehydrated spruce and the sound of inanimate nature: Cosmic particles bring 18 loudspeakers to colourful "music".
6 / 7 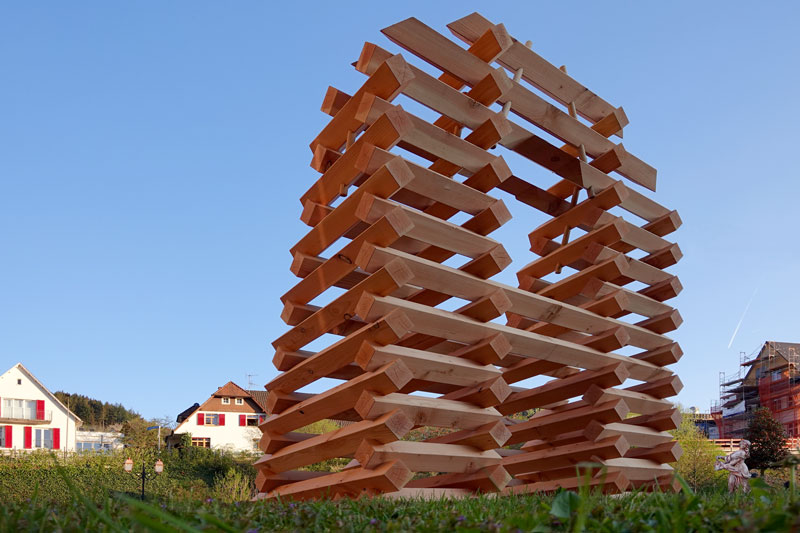 Evening atmosphere with the letter A made of Douglas fir wood in front oft he imachination labs.
❮ ❯

Day of Open Sculpture We look forward to the realization of the first sculpture at the Kleinebene in Oppenau. You are invited to celebrate with us this event on Sunday 24 July 2022 at 11-19 h.

Kick-Off The NATUR sculpture and land art project was presented to the public for the first time during the museum night in Oppenau in April 2022. Already in front of the imachination labs studio, the numerous visitors were welcomed by the first material realisation: the 3-metre-high letter A made of Douglas fir wood.

In the large studio space, a wide-ranging thematic exhibition under the title "Where NATUR is on it, nature is in it" illuminates the background to NATUR. The technical-constructive aspects are presented and also made tangible by means of a model of the planned 14-metre-high version.
The dynamic change of nature and landscape in the Black Forest commune was shown on a wall of historical postcards from Leopold Börsig's collection. Time cross-fades of current satellite images with aerial photographs from 1968 or district maps from the 1860s make the gradual forestation apparent in particular. A brief look back to the 1980s evokes images of dead trees caused by the Waldsterben at that time, an image of nature that Tim Otto Roth shaped in his youth.

Other works by the artist show how he has approached nature in completely different ways for over two decades: The flora domestica series is a shadow herbarium in which he captures the shadows of native flora in his own unique way, bringing out an astonishing colourfulness of vegetal shadows. A completely different form of an organic work of art is the presented MaSo tapestry, made from purely organic fibres and dyes in India. Finally, an invisible nature can be experienced in the two little towers of the studio space. The lightning that makes one of the towers flicker visibly from afar is caused by cosmic radiation that is measured live on site. The counterpart in the other tower makes this invisible radiation that affects us more tangible: an installation of 18 suspended loudspeakers that light up in colour traces the paths of charged particles by means of coloured light and different sounds.
The exhibition can be visited by appointment until mid-July.